I had only traveled to Nashville as a Horse Haven of TN agent/volunteer to help with this horrific rescue involving 84 starved and abused horses:

Then I saw him...Cannon County, Tennessee horse #55, a four year old, 16.1 hands high, cremello Tennessee Walking Horse Stallion. He was standing with his head down, sad blue eyes, and a nasty cough - not your picture of fine health. Between loading trailers, I would sneak down the aisle that #55 called home. Finally, I walked into his stall. He leaned over in my direction, coughed, and looked right at me. It was gut-wrenching. 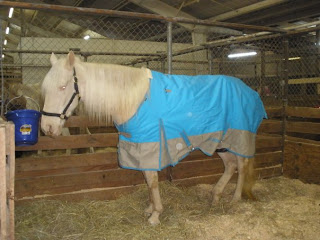 On the way back to the HHT barn in Knoxville, he consumed my thoughts. As a veterinary technician for twenty years, I've learned not to bring everything home - and trust me, that's not even my nature! Nina, HHT's Executive Director, told me that she would check into his status with HSUS (the Humane Society of the United States) if I wanted her to do so....

Needless to say, I was on my way back to Nashville four days later! At the Fairgrounds, #55 was over his illness, no fever or cough, and feeling every bit like a four year old stallion! What have I done? What have I agreed to? My husband is going to kill me! (If this horse doesn't first!) But there it was again, that cool, blue look as he hopped on the trailer for the three hour ride HOME.

It was obvious that #55 had been a stall kept stud. Unlike the other Cannon County horses, he had a long, lush mane and tail. It took him over a week to leave his stall on his own. His first "room" at the new place was a 12 X 24 foot stall leading to a small 2 acre pasture with his new goat brothers, Henry and Ralphie. Grass was a new experience, as was mud, the water tank and dogs. Having six dogs, it was going to be very important for #55 to "play well" with them! 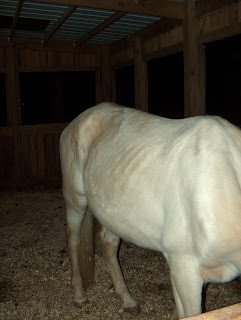 After a careful re-feeding program when his weight and health were stable, a small "procedure" was completed before Spring arrived and the mares started coming into heat. Hormones gone, it was time to see what kind of education the big boy had. Ground manners were very nice, bridling was no problem, and saddling he seemed okay with. Knowing my limitations, this is where the professional comes in! We found a fabulous trainer in Tellico Plains, TN - Rayna Granger. Within one day, Rayna called and told me I had a very willing partner and a diamond in the rough. He knew some of the basics - probably trained "old school" Walking horse style (up and down a barn isle to prep for shows). And within thirty days, we were well on the way to becoming a trail super star! Two weeks later, we headed to Middle Tennessee for a four day camping/ride. AMAZING! 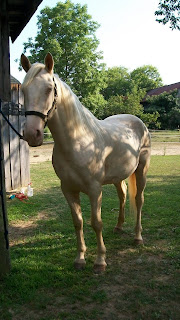 We even met one of the Cannon County deputies who helped in the case. This big, burly man got tears in his eyes as he stroked #55's head. He said he was so happy that this horse was going to have a happy ending.

And he will. Number 55 has changed my life. I've already learned so much in just seven months. I can't wait to see what our future brings, including many, many competitive trail rides around the Southeast we hope!

Oh, and his name? Number 55 is now named after a Jimmy Buffett song - "Licensed to Chill" aka "Chilly". Those Cannon County horses certainly earned their license to chill! 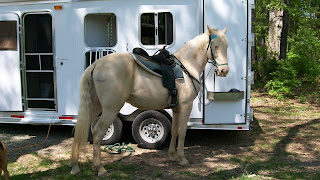 Posted by Horse Haven of TN at 5:39 PM No comments: