I met Missy during my first month as a volunteer at Horse Haven of Tennessee. Following my volunteer shifts, I am able to do Reiki (a relaxation and healing technique) work on the horses that our barn manager feels would benefit from the practice. I had been working primarily with a Hackney pony named Napoleon. Napoleon had a severe mistrust of most people, with the exception of our barn manager. He had been coming along nicely, so when a new group of rescues arrived, I began to work with them as well.

The first horse I chose to work with was Missy. As I entered her stall, I realized this was the type of moment I had most feared since begining my work at Horse Haven. Missy was severely emaciated, very weak and blind in one eye. She openly welcomed me into her space. She had been munching on a large pile of hay, deeply contented. You could see the relief in her face to have clean water and what probably seemed to her to be a never-ending supply of hay.

I began to let the the Reiki flow from the corner of her stall. She stopped munching to shift her stance in my direction. As the minutes rolled by, she began to lower her head into a relaxed position. After some time passed, she approached me and put her head right into my hands. This was a new experience for me as Napoleon had exclusively preferred to experience Reiki without contact. Missy directed my hands to her blind side, clearly wanting to feel the Reiki near her blind eye and on the side of her head.

After a while, she stepped forward and leaned into me so I could place my hands on her chest and shoulder. She gradually repositioned herself so that I could place my hands on the sharp prominent bones of her spine and hind quarters. It was in this very moment, while working with such a trusting and beautiful albeit severly neglected soul, that I realized that the Reiki was lifting me up and way from my fear and sorrow. The Reiki was allowing me to hold the light for Missy, creating the healing space that she desperately needed. It was even more amazing that I felt the forgiveness pouring out of her heart toward all human kind and to those that had abused her. She could see far behond this, even in her weakened condition, to allow another human to share her space, remaining fully open to the experienc that unfolded between us.

I thanked Missy for the healing she offered me and for giving me the privilege to create a healing space for her with Reiki. As I said good-bye to her, I was already looking forward to our next session the following week. I did distant Reiki work on her the following two days and felt a connection with her and acceptance of the Reiki treatments.

The following Sunday when I arrived for my weekly shift, my heart dropped when I saw that her stall was empty. I frantically sought out my shift leader who sadly informed me that Missy had colicked and despite all efforts to save her, she had died. She was surrounded by the volunteers on duty that night who had selflessly stayed until midnight to assit the veterinary team. She died peacefully, surrounded by love and caring that had been absent from her life for far too long. I still think of Missy to this day and feel so blessed to have known this beautiful spirit, even for such a short time. Her memory will remain with me always.

Below are some pictures taken of Missy on the day she was picked up and brought to Horse Haven. If you visit www.horsehaven.net, you can see lots of photographs of other horses who came from the same situation that Missy was in. Please open your hearts and help these horses in need. 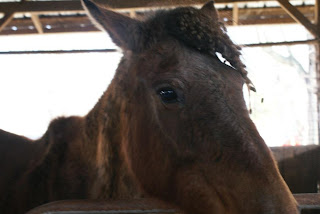 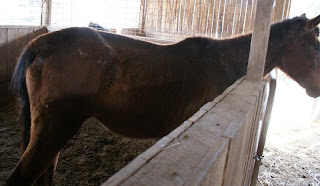 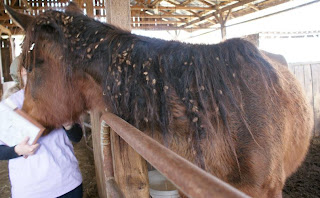 - Carrie Dorsey-Higdon
Posted by Horse Haven of TN at 9:28 AM No comments: